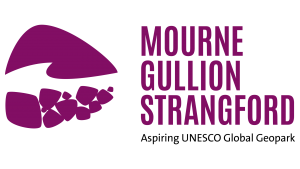 Geotourism is a unique product. It celebrates and promotes aspects of the Mourne-Gullion-Strangford region that make it special – its geology and the related fields of archaeology, mythology and heritage. The landscape around us has shaped the way we live and work and in some ways, we have shaped it.

The Mourne-Gullion-Strangford Aspiring UNESCO Global Geopark is made up of three Areas of Outstanding Natural Beauty. The Ring of Gullion, the Mournes and Strangford Lough and Lecale AONBs.

Each one has its own character and beauty and therefore importance for sustainable tourism but each one is still an area of intense scientific research. The Mourne and Gullion complexes are part of the British and Irish Igneous Province, which is itself part of the North Atlantic Igneous Province. They all have contacts with the Silurian/Devonian end-Iapetus lithologies making this region the only location on the island of Ireland where it is possible to tell the story of the closing of the Iapetus Ocean and the opening of the Atlantic Ocean in the same place. There are currently no other UNESCO Global Geoparks with similar characteristics.

One of the other geological highlights is the more recent glacial history that is found in the Strangford and Lecale AONB of the proposed Geopark. The best examples of this are found along the Ballyhornan coastline which is a beautiful locality even without knowing anything about its geological history and in particular, the spectacular Quaternary geology on display at Killard Point.

This designated site records the events and processes that operated in this area from 15,000 to 13,000 years ago during the closing stages of the final glaciation to affect the island of Ireland, the Midlandian. The site is of such importance that this short period has won a place in the scientific literature as the Killard Point Event.

A land of fire and ice

The area’s spectacular beauty has been forged by nature, torn apart by volcanic activity and sculpted by ice, providing a stunning backdrop to remarkable people and places. This dramatic and thriving landscape is where people live and work every day.

A myriad of ancient monuments from ancient civilisations, famous for battles that have been both won and lost, and a home to countless generations. The variety of landscapes found within the Geopark have led to a rich cultural and built heritage both bounded and blessed with mountains and maritime settings.

The exceptional geology of the Geopark has led to a remarkable range of natural and semi-natural habitats. All of these combine to make a varied mosaic of heather, moor, bog and pasture, dotted with freshwater and woodlands, and meeting sand and rocky shores, mud?ats and salt marsh.

The dramatic scenery of the Geopark has been shaped by the underlying geology but it has also given inspiration to some of Ireland’s most famous and legendary heroes. Both Cú Chulainn and Fionn mac Cumhaill, the legendary Irish heroes, have legends based in the Geopark area and more often than not inspired by the local geology.

The Mourne Gullion Strangford aUGGp has over 400 million years of geological history. It charts the closure of the Iapetus Ocean and the bringing together of the two parts of what we now know as the island of Ireland, its passage through tropical latitudes, the birth of the North Atlantic Ocean, and finally the shaping of landscape by ice during the last glaciation. There are two particular highlights that should be mentioned.

To find out more about our incredible Aspiring UNESCO Global Geopark visit our story book by clicking the link below.

This region is a unique place of great beauty and fascinating history. People have lived here for some 6,000 years… 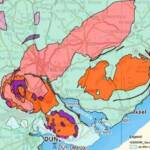 The Carlingford Lough & Slieve Croob region is one rich in geology, archaeology and history. This guide aims to give… 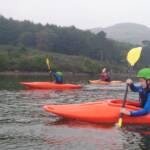 The often calm, tranquil waters of Cam Lough stretch for just over two kilometers in a north-west to south-east direction….

In This Section — Tourism in the Region
Upcoming Events