The brig ‘Hannah’,built in 1826 and refurbished in 1846,arrived in Warrenpoint from her home port of Maryport on March 16th 1849 with a cargo of coal.

Under the command of Captain Curry Shaw she set sail for Quebec on April 5th with 176 passengers and 12 crew.The great majority of the passengers were from the Parish of Forkill,South Armagh.

Oral tradition alleges that the captain confined the passengers below deck for long periods, cut the rations of food and water and threw the three latrines overboard after a few days at sea.

At 4-30am on April 29th the ‘Hannah’ struck ice in The Gulf of St. Lawrence.The passengers and crew scrambled onto the pack ice and  fifty-five people drowned or froze to death.Despite the best efforts of Surgeon William Graham,the ship’s medical officer, to stop them,Captain Shaw,the first and second mates and a few crewmen abandoned the sinking ship in the ship’s lifeboat.

At about 6-30pm Captain William Marshall of the ‘Nicaragua’ discovered the survivors on the ice and,at great risk to his own ship,undertook an heroic rescue of 129 passengers and nine seamen.

The people were so frozen that most of them had to be lassoed by the crew of the ‘Nicaragua’ and hauled aboard.Captain Marshall said ‘no pen can describe the pitiable situation and destitution of these passengers’.

He transferred some of the passengers to four other ships and arrived in Quebec fourteen days later;one day after Captain Shaw who had reported the total loss of all on board the ‘Hannah’.

Surgeon Graham testified against Curry Shaw,but he does not seem to have been convicted of abandoning his ship.Captain Marshall received an inscribed silver goblet from the Irish in Quebec.Most of the surviving passengers continued to North Crosby,Westport,Ontario,which their descendants still call ‘little South Armagh’.

Surgeon Graham,who came originally from Magilligan,Co. Derry,and whose brother was the perpetual curate of St. Luke’s church in Meigh,South Armagh,suffered a broken ankle when he jumped onto the ice in his efforts to prevent the captain from leaving the stricken ship.He rolled into the water and swam to the escaping longboat,but Captain Curry Shaw struck at him with his cutlass.He was hauled back onto the ice by some of the passengers,but suffered greatly from frostbite and died one month later in hospital in Quebec.

Another heroic figure was a passenger named James Ward of Maphoner townland,Forkill Parish.He was a renowned athlete and when the ship struck the ice he jumped back and forth from the ship to the ice and rescued many children.He survived,along with his wife,Mary McKinley of Clarkill townland,and their four children

All of the passengers had an horrific experience,but some suffered more than others.Henry Grant of Maphoner townland and his wife set off for Warrenpoint with their five children.When they arrived at the port their eldest child refused to board the ship and clung to Edward Quinn of Carricknagavna townland,the husband of her aunt Catherine Grant.She was eventually allowed to stay with the Quinns.When the ship foundered the other four children were drowned.The stubborn eldest girl went out to Canada three years later to join her parents and her story was handed down in the Quinn family to the present day.Mrs. Grant pulled a child,Bernard Murphy aged two years,from the sea,thinking he was one of her own children.

Bernard Murphy’s father and mother,John Murphy and Brigid Mary(nee McParland)of Tullymacrieve townland,also had an horrendous story to tell.In January 1849 their house had a fire and one of their children was burned to death.They set out with their four remaining children and lost the two eldest,who were twins.They were placed on the ice, but it became detached and they floated away and disappeared in the mist.John went into the water with a rope held in his mouth to rescue his three-year-old daughter Rose.He succeeded,but lost all of his teeth from frostbite.Rose was so traumatised that she was unable to speak until she was six years old.

Perhaps the saddest story of all was that of Ann McGinn of Lathbirget townland,Forkill Parish.Her husband had emigrated in 1848 and she was travelling with their six children to join him in Ontario.She arrived in Quebec alone!

On a happier note,Newry is being honoured during the Famine Commemoration to welcome Alun Evans, the great-great-great grandson of Captain William Marshall.Alun is being accompanied by his wife,Barbara,and will unveil two commemorative plaques,which are sponsored by the Newry Maritime Association, in Warrenpoint on Friday September 25th at 4pm, and in Newry at 11-30am on September 26th.He is bringing the silver goblet presented to his ancestor for his outstanding heroism and also Marshall’s hand-written autobiography.He will attend the official event on the afternoon of September 26th and on that evening at 7-30pm he will be the guest of the Newry Maritime Association at a lecture and social function in the INF Club in William Street,Newry.Interestingly,a number of the outstanding young South Armagh traditional musicians who will perform at that event are relatives of the passengers on the ‘Hannah’.Thus the connections continue.Do come along and join in. 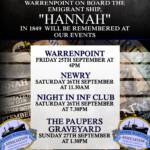 As part of the Annual Famine Commemorations this is a series of events focusing on the loss of the “Hannah”,… 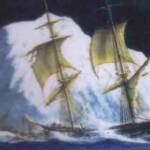 Remembering the Hannah- tales of heroism

As part of the Annual Famine Commemorations this is a series of events focusing on the loss of the “Hannah”,…

As part of the Annual Famine Commemorations in Newry, Mourne and Down this is a series of events focusing on…