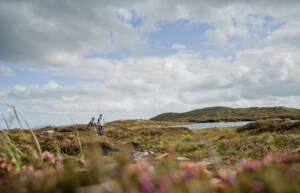 Take a journey back in time and follow in the footsteps of the legendary Fionn Mac Cumhaill (or Finn McCool) of the Fianna warriors where Fionn walked up the slopes of Slieve Gullion to the lake near the summit to find a beautiful young lady sobbing on the water’s edge. Being a gentleman he enquired as to why she was crying; to which she replied that she had dropped her golden ring in the bottomless lake. Without a moment’s hesitation Fionn ripped off his shirt and dived in, swam down until he found the ring, grabbed it and returned to the top only to find an old hag laughing, the Calliagh Berra. The witch had tricked Fionn and he fell out on the lake’s shore as an old withered man. When Fionn came down the mountain, no-one recognised him, not even the Fianna! However, when his trustworthy Irish Hounds smelled the old man they knew that he was their Master. Fionn, the Fianna, and the hounds forced the Calliagh Berra to restore Fionn to his youth, but it is said that his hair remained white like an old man’s for the rest of his life, and that his fate is said to befall anyone who bathes in the lake to this very day. Are you brave enough to dip your feet in the Calliagh Berra’s lake?

The huge burial cairn located on the summit of the mountain, the South Cairn, is known as The Calliagh Berra’s House and is the highest surviving passage tomb in Ireland or the UK.

You can crawl into the burial chamber via a passageway in the side of the cairn. A skylight allows light to enter, so you don’t need a torch. The earliest documented investigation of the site dates to 1789, when the chamber was opened by locals searching for the old lady Cailleach Beara, but only a few human bones were found, the Calliagh Berra’s?