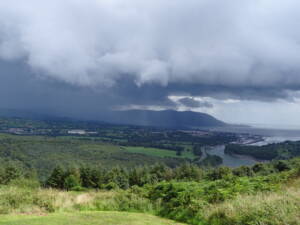 Mac Mhurchaidh was a tory or raparee (guerrilla fighter) born in South Armagh in around 1720. He was said to be a fine looking man and used to introduce himself to his victims as “the handsomest man in Ireland”. He had a reputation as a great drinker and charming companion of women. Yet it was over-indulgence in drink and promiscuity that were to lead to his downfall and death. Mac Mhurchaidh and his close friend and fellow poet Peadar Ó Doirnín were active Jacobites up to the 1745 rebellion; their main adversary was John Johnson of the Fews, a tory hunter. In 1744 the Jacobites called a monster meeting on Slieve Gullion to gather people and motivate them in advance of the arrival of Bonnie Prince Charlie. This monster meeting caused unrest around the area and Johnson was attacked and nearly died.  While recovering from his injuries, Johnson called an uneasy truce with the pair. But despite this ceasefire he still offered a reward of £50 for Seamus’s capture (giving an economic worth of over £1,054,000 today calculated as a measure of the amount of this wealth relative to the output of the whole economy at the time www.measureingworth.com)

During this truce MacMhuchaidh often drank at a sibín or inn on Flagstaff, owned by Patsy MacDecker. Seamus became a lover of Mac Decker’s daughter Molly.  However the affair was tempestuous and ended in a fierce argument and break up with Molly swearing revenge on Séamus for infidelities she had been told about by a jealous companion of MacMhuchaidh who wished to have Molly for himself. Molly was offered £50 by Johnson to trap her former lover and with the aid of her father this she did, getting him insensibly drunk and off-guard and summoning Johnson and his men to capture him.

MacMurchaidh was imprisoned in Newry and sentenced to be hanged, but he forgave all involved in his capture including Molly. Patsy MacDecker is said to have received his blood-money in copper coin as a mark of the low esteem he was held in, even by those in authority, for his betrayal of his friend. Folk legend has it that the effort of carrying the reward twenty miles home caused him to have a heart attack and die within sight of the sibín.  The community also punished Molly MacDecker for her treachery, she was ostracised and became mentally ill. She eventually drowned herself. 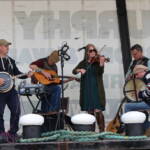 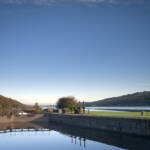 Newry Canal – Heritage on the Lock

The Newry Canal project is implemented through The Ring of Gullion Landscape Partnership Scheme. The LPS is part of the Heritage… 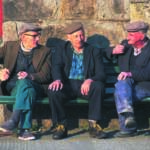