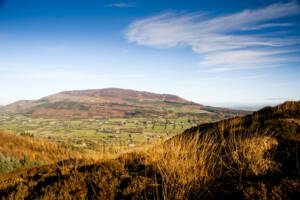 Slieve Gullion played a key role in the life of the legend, Cú Chulainn.

According to folklore, the mountain of Slieve Gullion is named after Culann the metalsmith, who lived on its slopes. It is here that Sétanta spent his childhood and was given the name Cú Chulainn.

Culann invited Conchobhar mac Neasa, king of Ulster, to a feast at his house on the slopes of Slieve Gullion. On his way, Conchobhar stopped at the playing field to watch the boys play hurling. He was so impressed by Sétanta’s performance that he asked him to join him at the feast. Sétanta promised to join him after he finished his game. Conchobhar went ahead, but he forgot about Sétanta, and that evening Culann let loose his ferocious hound to guard his house as it was a dangerous place becasue of raiders and the like. When Sétanta arrived, the hound attacked him, but he killed it; some say by smashing it against a standing stone, and others by driving a sliotar (hurling ball) down its throat with his hurley.

Culann was devastated by the loss of his hound, so Sétanta promised to rear him a replacement, and until it was old enough to do the job, he himself would guard Culann’s house. The druid Cathbhadh announced that his name henceforth would be Cú Chulainn, “Culann’s Hound”.

In the Táin Bó Cuailnge, the nearby Gap of the North is where Cú Chulainn single-handedly fended-off the army of Méabh while the warriors of Ulster were under a spell.

The Cú Chulainn animated series was produced by the Nerve Centre for BBC NI’s education department. There are six 5 minute episodes. Each episode recounts a major event from the life of Cú Chulainn from the boyhood story of how he earned the name ‘The Hound of Ulster’ to the epic confrontation known as ‘the Cattle Raid of Cooley’ in which Cú Chulainn lost his life. Teachers can play each individual episode on an interactive whiteboard, stopping the story at any point to facilitate questions and classroom discussions. Click here for more information.