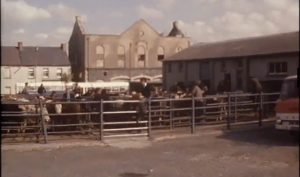 In this RTE programme, the people of Crossmaglen in south Armagh talk about life in their town and how it has been affected by the conflict in Northern Ireland in 1977.

At the end of summer of 1976, the programme ‘Next Stop’ went to Northern Ireland to make two documentaries one about the Shankill and another about South Armagh where the majority of the population are Nationalist and pro-Republican.

‘Next Stop’ was a weekly programme from and about the provinces highlighting items of general interest of concern. Programmes included a viewers’ service with an exchange of ideas as a way of comment and reaction.

This episode of ‘Next Stop’ was broadcast on 13 April 1977. The reporter is Nicholas Coffey.