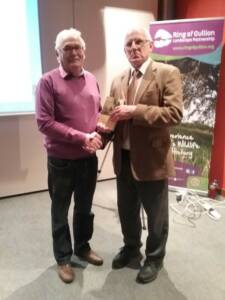 “Keep yourself to yourself”, she had said. “Don’t laugh at others and they won’t laugh at you”. His mother’s words were not exactly strictures; more guidelines within which a shell might grow, harden and iron-plate his difference. He understood. Whatever the words, he knew that ‘don’t laugh at others’ was a prayer on her part and that not to smile was part of its hope. And he grew into the mould.

When spoken to, he would incline his head, look thoughtful and answer slowly and gravely. To digress was offside. When laughter spoke to him he kept it inside, bottled and stored for future privacy. Not to smile was more difficult but he mastered it. He could, with a series of small bows of the chin and deft use of the eyebrows, convey that he was laughing with people, never at them. And there came a time when he had crafted the repertoire into a formidable shield. And the shield seemed strong and effective; as strong and effective as the granite boulders, the wave-breaks, between the beach and the promenade above.

He kept himself to himself and, in the library, gathered information, stored it and filed it in his head. But it was the beach which became his haven, his real academy, his universe. The smell of the sea, the moods of the mountain, the always moving sand dunes beyond where the river dissected the beach; these were the channels that washed the information into knowledge and understanding, that carried the colour, pain and music of life.

On the rocks between the beach and the harbour, he watched a fisherman. The man had his right arm extended in a straight line with a pole and net at the end of it. The arm and the pole were as rigid and solid as the mountain above but the net was a silent convulsion of movement and colour. A fish within the net shimmered in great curves, bends and flows. The fluidity of the movement…