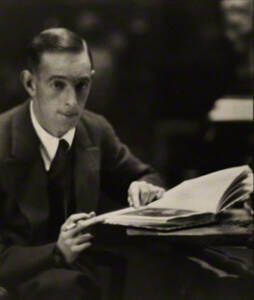 Brian Oswald Patrick Donn-Byrne (1889 –1928) was a prolific Irish writer, well known for his novels, short stories and poetry . He was born in New York but returned with his family to Ireland and grew up being equally fluent in Irish and English, living in Camlough where some Irish was still spoken.

At University College Dublin, he studied under Douglas Hyde, the famous Gaelic scholar and first president of Eire, he also did work at the Sorbonne and in Leipzig, Germany. He turned down his PhD when he learned that he would have to wear evening clothes to his early morning examinations – a thing no true Irish gentleman would ever do! After Donn-Byrne’s marriage to playwright Dorothea Cadogan, the couple lived first in Connecticut before returning to Ireland to live in Coolmain Castle in Co. Cork. Several of his works are still in print, including The Wind Bloweth (read for free here), and Messer Marco Polo (read for free here).

His headstone reads, in Irish and English: “I am in my sleeping and don’t waken me.” It first appears in Ireland: The Rock Whence I Was Hewn, where Byrne concludes with the following poem:

The bells of heather
Have ceased ringing their Angelus.
Sleepy June weather
Has instilled a drug in us.

The cry of the plover
Is hushed, and the friendly dark
Has drawn a blue hood over
The meadow lark.

We travel sleeping,
Over heather hill and through ferny dale,
To the Land of No Weeping,
Of races, and piping and ale.