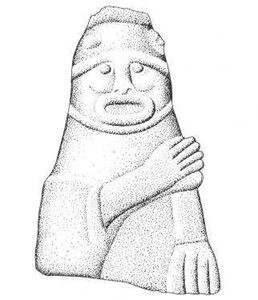 The subject of this project is ‘Ulster’s changing borders’, the archaeology and history ofthe east border region and the changes in the border from earliest times. The counties discussed are Counties Louth and Monaghan and parts of Armagh and Down with the Districts of Armagh, Newry & Mourne and Banbridge.

The present border is between the six counties of Northern Ireland and the 26 counties of the Republic. The ‘border’ in some shape or form has always been present between the province of Ulster and the rest of Ireland and the concept of a border or a cultural division around the east border counties is examined from its beginnings in prehistory. The Neolithic in Ireland, for example, is unique to the whole of Ireland and its culture is spread throughout the country. Yet its monuments are concentrated in distribution in the northern half of Ireland above a line from Sligo to Cavan and Monaghan. The distribution of Anglo-Norman mottes, on the other hand, shows a clear antipathy to the lands outside the east and south of Ireland, with a cut off line at north Louth to Monaghan. The physical characteristics and the underlying geology of the border region may give some reasons as to why there is a ‘border’. The fact that the Anglo-Normans encroached only a little into the present northern counties may have had a bearing on the future history of the region and reasons are given for their choice of settlement. The stages of human occupation of the east border counties of Ireland are briefly described below. These stages include the first appearance of man in Ireland in the Mesolithic, and in the Neolithic when he first farmed and built stone tombs. In the Bronze Age metallurgy was first introduced into the country and trade in gold prompted the development of many exotic types of ornaments. The Iron Age with its major defence systems of border ditches and heroic sagas is described. This is followed by the early medieval period when monastic sites were founded over the entire island, and when ringforts were built widely as farmsteads. Souterrains, or underground passages built for refuge and perhaps also storage, were a major feature of Ireland during the 8th or 9th century AD to the 12th/13th century AD and their distribution is discussed. The Anglo-Normans had a major impact on the country, in particular in the south and east of the country and in relation to the development of the border area. Their mottes and later structures are distributed widely in the areas they conquered. Later, defensive castles were built to defend their territories, and in many areas to defend the Pale from the land beyond the border, as will be shown.

The plantation of the border counties took place by ‘British’ settlers, a large percentage of which were Presbyterian in the 17th century. Towns and the linen industry developed throughout the 17th and 18th centuries and Presbyterian meetinghouses were built mainly during the 18th and 19th centuries as will be shown. Other buildings such as Orange Lodges are a feature of their culture. Large estates evolved in the 18th and 19th century, held by mainly the Protestant gentry. During the Second World War, the six northern counties, as part of the United Kingdom prepared for defence and several features such as pill boxes and concrete bunkers still remain. In later years, the north’s well known troubles developed and fortified British Army structures were built on the crossing points between the Republic and the United kingdom and as well as in many ‘hotspots’ around the border areas. These are being dismantled at present but several army structures remain in place. Photographs and descriptions of the sites illustrating the rich history and archaeology of the border counties of Louth, Monaghan and the southern parts of Armagh and Down are given both in this text and in the attachment files.