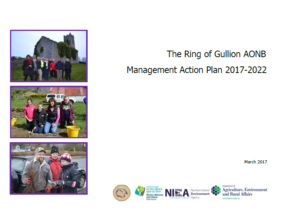 The Ring of Gullion AONB Management Action Plan includes feedback from DAERA, and was out to consultation for several weeks in 2016/2017.

Most of the actions relate to the work of the AONB Partnership working in partnership across a wide range of remits and responsibilities. In some cases the lead is taken by a government Department or local council department. In almost every case the support and involvement of local people, landowners and recreation users is needed.

The Action Plan is also about achieving shared objectives across the whole of the AONBs, including but also extending beyond the council’s property.