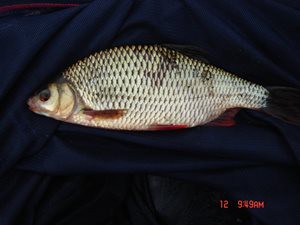 In summer of 2006 Oriel Angling was awarded a contract by the South Armagh Tourism Initiative to survey the angling potential of a series of lakes in the south Armagh area. It was known for some time that appreciable stocks of both coarse and game fish were present in these waters but little quantitative information existed regarding their angling potential or their biological status. The main purpose of the survey was to advise the SATI on how these waters might contribute to sustainable tourism in the south Armagh area.

Initially efforts were made to net the lakes selected for assessment but due to the dense weed growth encountered it proved impossible to trap a significant proportion of the fish present. As is standard practice in angling surveys it was decided to concentrate on a rod survey but to supplement this approach with the collection of biological and water chemistry data. A cross section of fish were sacrificed and tested for the presence of unusually large concentrations of parasites and scales were taken and read from the fish sacrificed. Apart from these fish all catches were weighed and then returned alive to the water.

In all cases the fish stocks were in a very healthy condition and displayed no signs of heavy parasitic burdens or unusual external lesions. Some ulcerated pike were recorded from Lough Patrick and also black spot disease was noted on some roach in Loughs Patrick but these are common features of coarse fish stocks in Ireland.

Scale samples were examined from 6 lakes (Fig 1), comprising a selection of Roach, Rudd and Trout scales. Three sets of pike scales were also retained and read. In general the growth rate of the fish was closely aligned with the conductivity of the waters from which they came. The faster growing fish were in evidence in the waters with a higher level of alkalinity and the stunted or slower growing populations were in the more acidic waters.

The fastest growing fish recorded were roach from Peter’s lake, while relatively good growth was also recorded from Patrick’s lake and from Rudd resident in Lough Cullyhanna. In contrast the roach populations of Loughs Alina and particularly Drumvee Lough were slow growing and in the case of Drumvee could be described as stunted.
The trout examined from Drumuckvall displayed moderate growth rates but it did appear as if they had spent up to two years in small side streams before entering the Lough and that the growth in the Lough itself was moderate to good. It is interesting to note that these finding s are in stark contrast with the angling results which were very impressive. The Lough is small, no more than about 5ha and it can be concluded that because of its remote and inaccessible location, it had not been fished for many years.

In general the soils of south Armagh are typical drumlin soils with a modest alkaline content and with acidity levels of around neutral (generally 6.8 to 7.0). This contrasts with levels of 7.5 to 8.2 in the midland waters and in the great western lakes. The productive potential of even the richest of the lakes surveyed is modest in comparison to the exceptional potential of the Irish limestone Loughs. Development of the undoubted angling potential of the South Armagh area should be tempered with the knowledge that we are largely at this time dealing with lakes which are little fished and that angling surveys are reporting on what are, for all intents and purposes, virgin waters.

In order to capitalise on the potential of these Loughs strictly enforced conservation measures are required, in addition to a clearly focused and well integrated management plan.