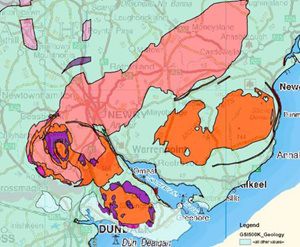 A new caldera fault segment exposed at Slieve Gullion: implications for the emplacement of the early ring-complex.

A contact zone between porphyritic microgranite of the early ring-complex of the Paleocene Slieve Gullion igneous centre and Lower Palaeozoic metasedimentary rocks of the Longford– Down inlier was exposed along a 300m section excavated during construction of the new M1 motorway. The outcrop displays a thin sliver of Longford–Down metasediment in contact with porphyritic microgranite in a steep, and locally intensely crushed, contact zone that dips away from the ring-complex. This outcrop pattern is reminiscent of a ‘caldera-superfault’. Given the recent discussion on sheet versus ring-dyke emplacement of the early ring-complex at Slieve Gullion, this new evidence argues in favour of the traditional ring-dyke model with magma ascending along an active ring fracture associated with caldera subsidence.
Valentin R. TrolL, Fiona C. Meade, David M. Chew and C. HENRY Emeleus

Caldera Controversy at the Ring of Gullion, County Down.

Many of you will have seen the spectacular new road cuts on the M1/ A1 motorway between Dundalk, Co. Louth and Newry, Co. Down. These road cuts dissect the SE and NE portions of the Ring of Gullion and represent some of the freshest rock exposures ever seen at this ring-complex. Indeed, the blasting of these new exposures could not have been timelier, as recently there has been much debate on the formation of the Palaeogene igneous centres, and especially the Slieve Gullion ringcomplex, with scientists from Ireland and across Europe being involved.
Fiona Meade, Valentin Troll,  David Chew, Ian Meighan, Mark Cooper, Henry Emeleus.

The Palaeogene Slieve Gullion Igneous Centre in southern Armagh, Northern Ireland, consists of a layered central intrusive complex surrounded by a prominent and slightly older ring-dyke that intrudes both Lower Palaeozoic sedimentary rocks and the Caledonian Newry Granodiorite pluton (452 Ma). The ring-dyke comprises two major rock types: porphyritic felsite and porphyritic granophyre. We analysed both ring-dyke lithologies, both types of country rock, and a local Palaeogene basalt dyke sample for Sr and Nd isotopes. Trace element and whole rock data for this suite suggest that there are two distinct groups of both felsite and granophyre: one Si-rich and one Si-poor, most likely representing two magmas from a zoned chamber and their mushy chamberwall equivalents (McDonnell et al. 2004). Isotope data show the low-Si rocks to be higher in radiogenic Sr than the high-Si rocks, which is inconsistent with a simple AFC-scenario of increasing sediment assimilation with higher degrees of differentiation. However, using MORB-type basalt as a starting composition, the low-Si ring-dyke rocks can be modelled through AFC with Lower Palaeozoic sedimentary rock as the contaminant. The decreasing 87Sr/86Sr trend from low-Si to high-Si dyke rocks, in turn, represents a second stage of contamination. Selective assimilation of the most fusible portions of Newry Granodiorite, which is lower in radiogenic Sr than the local sedimentary rocks, appears to be the most plausible solution. The Sr and Nd data are consistent with (a) at least a two-stage contamination history during upper crustal residence and storage, whereby fractionatingmagmas of basaltic and intermediate composition are contaminated by local sedimentary rocks, giving rise to rhyolite magmas that experience additional shallowcontamination by Newry Granodiorite, and (b) a zoned rhyolite magma chamber where high-Si magma is stored in the upper part of the chamber where crystallization and crustal contamination are most extensive.
VALENTIN R. TROLL, JANE P. CHADWICK, ROBERT M. ELLAM, SUSAN MC DONNELL, C. HENRY EMELEUS§ & IAN G. MEIGHAN

A new exposure of A cAlderA fAult segment At the slieve gullion igneous centre: implicAtions for the emplAcement of the eArly ring-complex.(4mb)
Valentin Troll

A taste of the unexpected: subverting mentalités through the motifs and settings of Irish passage tomb.
Loughcrew, or Sliabh na Callighe, is one of Ireland’s most magnificent and abounding archaeological landscapes. It is located at the western end of Co. Meath and incorporates a complex of passage tombs distributed across the four neighbouring hilltops of Carnbane West, Carrickbrac or Newtown, Carnbane East and Patrickstown, in an area measuring 3 km from east to west and 600m from north to south (Fraser 1998, 206; Cooney 2000a, 159). On a clear day the panoramic views from the summits of these hills make it possible to see the Wicklow Mountains, the Mournes, Slieve Gullion and the mountains to the north-east (Shell and Roughley 2004, 22), giving a view of Ireland from sea to sea, about its narrowest part (Conwell 1866, 355). Previous accounts of these passage tombs have addressed individual motifs and how they are related to burials and deposits, the entire complex with the locations and orientations of specific passage tombs, and movements of people through and around the monuments (e.g. Herity 1974; Cooney 1990; Thomas 1992; McMann 1994; Shee Twohig 1996). This paper aims to build upon these previous ideas of landscape context and motif location with physical and visual engagements in order to develop a further argument that includes the possible sequences, differences and repetitions that are being performed by the passage tombs on Carnbane East and West.
Andrew Cochrane