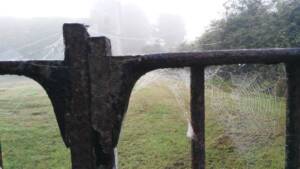 The Traditional Building skills training is implemented through The Ring of Gullion Landscape Partnership Scheme. The LPS is part of the Heritage Lottery Fund’s programme to conserve and enhance some of the region’s most treasured landscapes. The LPS runs from September 2015 until August 2018. 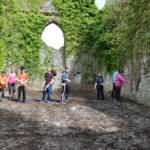 Whilst we await for further possible restoration plans to be explored the Youth Rangers endeavoured to make the inside of the church more welcoming to visitors.  They worked hard throughout the day, removing nettles, brambles, tree stumps and various weeds. Once the floor was cleared the soil was levelled and planted with wildflower seeds.

Even just having bare soil was a vast improvement on the tangled mess that was there before. We can’t wait to see it in full bloom. 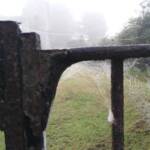 The old gates to the church yard were removed with the aim of sandblasting and re-galvanising them, but when the rust and old paint was stripped it was discovered that they were of an older manufacture than was previously suspected, with the joints being welded with lead. This would have melted in the galvanising tank resulting in a pile of metal slats rather than a gate, so instead the gates were just cleaned and painted with a number of layers of rust proof paint and were re-erected. 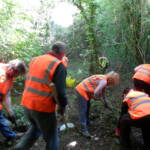 Over the course of the day,  the geo-conservation volunteers from the Mournes Cooley Gullion geotourism project removed layers of broken glass, along with the majority of ground covering vegetation and levelled the soil at the church entrance. On the second volunteer day we removed the saplings growing inside the church  and turned them into a “mini-beast hotel” in the grounds of the church. More work will be carried out to complete this task.