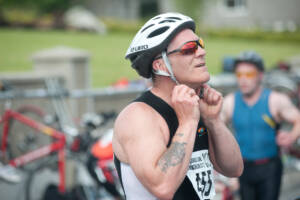 The Cultural heritage festival and historical revival project is implemented through The Ring of Gullion Landscape Partnership Scheme. The LPS is part of the Heritage Lottery Fund’s programme to conserve and enhance some of the region’s most treasured landscapes. The LPS runs from September 2015 until August 2018.

This project aims to enhance local festivals/events through the introduction of new elements that enhances knowledge/appreciation of the heritage of the area. It also aims to raise awareness of the heritage and historical events of the area through participation in local events/festivals. 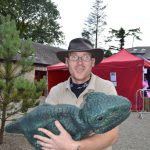 Another busy Lúnasa Festival is finished, and was a great success. The Geotastic Extravaganza was the highlight of the Festival complete with roaring dinosaurs, model volcanoes and face painting to name a few of the activities. There were plenty of opportunity to learn all about the Earth and this story of how the Ring of Gullion came to be, though you did have to watch out that Roary the T-Rex didn’t try and eat you.

We ran a new bus tour this year, which gave people the opportunity to go up and around Slieve Gullion mountain, without having to resort to hiking. This augmented a number of other bus tours, covering the highlights and history of the Ring of Gullion. There were plenty of guided walks as well.

To check out some of the pictures from the events, check out the Lúnasa Festival 2019 gallery. 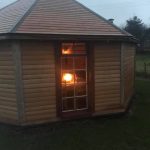 Newry, Mourne and Down District Council and the Ring of Gullion Partnership kicked off their Winter Solstice Festival on 1st November 2018, traditionally known as Samhain. In Celtic Ireland, about 2,000 years ago, Samhain was the division of the year between the lighter half (summer) and the darker half (winter). The Ring of Gullion has a very special connection with the Winter Solstice.

For the two months of December and November, the Ring of Gullion Partnership  provided a magical programme of events showcasing all that is great about the area with a range of lectures, music and craft workshops. This area reflects the mix of cultures from the Neolithic Era to the present day.

The Festival included showcasing one of the area’s greatest storytellers Michael J Murphy with a winter school in his honour; this year highlighted the rich cultural language of the local area.

The Festival was fortunate to have Mr Paul Gosling speaking about the Táin Bó Cúailnge, the story of a cattle-raid reputed to have taken place during winter sometime around the time of Christ. It is often ranked alongside Ireland’s greatest literary classics and frequently described as ‘epic literature’.

We also had Dr Éamon Phoenix, a political historian, journalist and commentator to give a talk on the Northern Narratives of the 1916 Rising.

The Winter Solstice Festival had two nights of celebration of the rich social history of the area. On 6th December there was a  night recognising and celebrating the immense contribution of women to South Armagh stories with exhibitions and photographs, music and song. Then on the Friday night 7th December in Dromintee Primary School, the hugely successful Facebook page ‘At Slieve Gullion’s Foot’ went live with never-before-seen photos, storytelling from Seamus Murphy and poetry from Malachy Ó Raifeartaigh.

The Festival offered 2 special days over the 21st and 22nd of December filled with meditation, reflection, mindfulness and ritual, a perfect way to connect with the cycles & rhythms in your body and in the world around.

On Friday 21st Joanna Callan and Bluebell Glamping, Mullaghbane teamed up to provide a wonderful opportunity to escape from the hussle and bustle of the festive season, to connect with yourself and with nature and to spend time in one of the most beautiful and peaceful places in Ireland.

On the 22nd December, Ring of Gullion Ambassadors Ann Ward and Gary Martin provided an experience to take time and space for personal reflection and develop personal goals and affirmations for the year ahead.

To view some of the highlights, visit the Winter Solstice Festival gallery here. 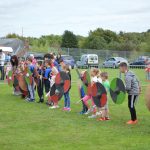 Dinosaurs, Celts and singer-song writer John Spillane all visited the Ring of Gullion this August and helped make the Lúnasa Festival a resounding success, increasing our numbers on last year by 121%.

Our Ambassadors and event volunteers surpassed themselves once again, leading a range of guided walks and talks as well as helping run the larger events of the festival.

To view some of the highlights, visit the Lúnasa Festival gallery here.

We have had another successful Winter Solstice Festival. This year we expanded the festival into November to give us more time to celebrate winter traditions and explore some new ones, such as a ‘Following in the Footsteps of the Celts’ bus tour.

Budding crafters had the opportunity to create their own willow wreaths and straw decorations to take home. We we also treated to an entertaining range of stories about Cú Chulainn read by author Réamonn Ó Ciaráin. Another highlight was a fascinating lecture by Dr Frank Prendergast, who gave insights into his research looking at the solstice alignments of Neolithic cairns and other monuments, not least of course, our own Slieve Gullion passage grave.

Sadly, the weather was not on the side of those who wanted to view the setting sun from inside the Slieve Gullion Passage tomb. The group on Monday were lucky enough to have a decent view of the phenomenon, the rest of the week was marred by thick mist, clouds or rain. 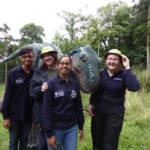 We’ve had another successful Lúnasa Festival, with 42 separate events running throughout the month of August. The events brought in around 1,600 visitors.

Some of the highlights included Vikings at the Flagstaff Fiesta, guided walks by our knowledgeable Ring of Gullion Ambassadors and Roary the T-Rex at the Geotastic Extravaganza.

You can see pictures of some of the events here.

This year we extended the Winter Solstice Festival to encompass the whole of December, up to the end of the winter solstice, so there was lots to see and do.  From star gazing to Christmas crafting using willow and straw, a lunch time lecture and Solstice Concert, there was something for everyone.  Santa was even in the area, giving out presents.

Our hikes to the cairn were as popular as ever and almost all the groups were fortunate enough to see the spectacle of the light from the setting sun illuminating the inside of the cairn.  Those who went up on Monday 19th were treated to perfect conditions with not a cloud in the sky.  If you would like to take part next year bookings for the hikes open at 9am on the 1st December each year.

You can view the event gallery here. 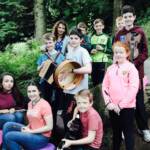 September sees the end of our second Lúnasa Festival.  Following on from the success of our first Lúnasa Festival, we were able to secure additional funding from Newry, Mourne & Down District Council.  The additional funding enabled us to link into the ‘Year of Food & Drink’ with Culann’s Feast, which showcased and celebrated our local food, drink and heritage.  Another festival highlight was the revival of the Flagstaff Fiesta, which was last held 40 years ago.

The Lúnasa Festival finished off on a magical highlight at the Council’s ‘Footsteps in the Forest’ event, during which time all the mythical creatures of Ireland descended on Slieve Gullion Forest for their annual meeting.

Overall we almost double our visitor figures for the festival to 2000 and Footsteps in the Forest brought in an additional 7000 visitors to the area.

You can view the event gallery here.

Another successful Winter Solstice at the Ring of Gullion 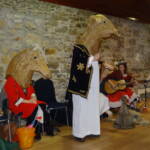 The 2015 winter solstice festival took place from 19th to 22nd December.  The main highlight of the festival is the illumination of the summit Passage Grave, by the setting sun.  Due to the small size of the Passage Grave, only 20 people can enter it at any one time.  Needless to say, it is a rather weather dependent phenomenon.  Most of the hikers who made the climb and braved the gale force winds on the summit were treated to the spectacle.

In addition to the summit hikes, visitors were treated to a range of events from a meditation day retreat, separate performances from Accolade Community Choir and the Armagh Rhymers, as well as children’s basket weaving and guided walks with the fairies.

All in all it was a nice way to kick off the Christmas festivities.  You can check out pictures of the festival in the gallery.

First Ring of Gullion Lúnasa Festival is a hit 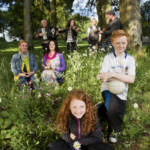 The idea of the Lúnasa Festival was to have an overarching brand for summer events in the Ring of Gullion. We aimed to advertise all the events going on in the area.

The Lúnasa Festival was run in partnership with local community and business groups in the area. The Lúnasa Festival Working Group provided a range of ideas for events which were then implemented either by themselves or in conjunction with the Landscape Partnership (LP). A total of 42 events were advertised as part of the Lúnasa Festival, 27 of these were partly or wholly organised and run by the LP and AONB. The rest were by different community organisations and local businesses such as ROGHA and Red Balloon Creative Studios. The Ring of Gullion Ambassadors were instrumental in running some of our events.

Check out the gallery here.