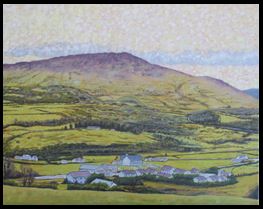 An exhibition of oil paintings by Conor Ó Daighre exploring Ireland’s mystery mountain from the surrounding townlands of South Armagh and North Louth in Sean Hollywood Arts Centre, Newry for the month of February 2019.

Views of Gullion is a series of paintings depicting Slieve Gullion from the surrounding townlands of South Armagh and North Louth. At the heart of the unique geological formation and designated Area of Outstanding Natural Beauty, the eroded remains of a Paleocene volcano rises above the ancient rolling hills, steeped in ancient mythology including the sagas of Fionn Mac Cumhaill and Cú Chulainn.

The ghosts of Gaelic Ireland abound in these forgotten corners of the The Ring of Gullion, an area that has seen great recent changes in the form of long-sought demilitarisation, seemingly unbridled housing development and deforestation rumoured to be driven by the ‘cash-for-ash’ scandal. Despite this and the impending crisis of Breatimeacht and late-stage capitalism, the mountain’s presence remains a timeless and steadfast reminder of our roots and heritage and yet, depending on the weather, time of day and vantage point, Gullion’s outline and colours change dramatically, making a fascinating subject for landscape paintings.

Conor Ó Daighre is an artist from the foothills of Slieve Gullion. He has travelled extensively in Europe and Asia but has always been drawn home and his latest 2 year stint back has enabled him to return to developing his interest in landscapes, a skill he feels is an ongoing and exciting journey into improving and exploring different styles of oil painting. The pieces of Views of Gullion express this experimentation and offer only an initial glimpse into what he hopes will be a project lasting a lifetime of returning to the mountain to endeavour to capture its glory from the unlimited perspectives it offers. For more information, visit www.odaighre.com.