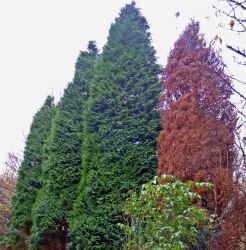 A plant disease that affects Lawson cypress trees has been diagnosed for the first time in Northern Ireland on trees in Tollymore Forest Park in Co. Down.

The disease, caused by a pathogen known as Phytophthora lateralis, infects tree roots which come into contact with spores in the soil or water, and kills most Lawson cypress trees it infects. Planting infected plants, or using soil that is harbouring spores, are key pathways for introducing the disease into new sites.

A spokesperson for the Department of Agriculture and Rural Development (DARD) said, “Measures to control the disease at Tollymore include the felling of infected trees which is a normal practice when dealing with this type of tree disease. While the majority of the Forest currently remains unaffected, it will be necessary to restrict public access to certain areas to prevent soil movement. We would ask users to observe signage at the site and to remain on the waymarked paths.”

The first outbreak of the disease in the UK was confirmed at Balloch Castle Country Park, Scotland in November 2010. There are now four confirmed outbreaks in Scotland. There have been no outbreaks in the Republic of Ireland.

Anyone concerned about Lawson cypress trees that they may have are asked to access http://www.nidirect.gov.uk/forests where information on the identification of Lawson cypress and P.lateralis symptoms is available. If owners are still concerned about the disease they should then email [email protected] with a photograph of the tree and provide an address for the location of the tree.

Click on the link below for advice to help prevent spread of tree disease.