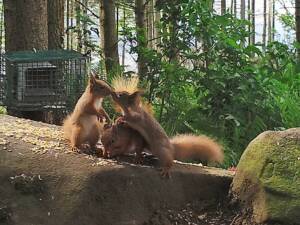 The Ring of Gullion and Cooley Red Squirrel Group is a non-profit organisation dedicated to the preservation and well-being of all the wildlife on Slieve Gullion and the surrounding area, particularly our native red squirrel.

Seven years ago, due to a fungal disease that affected the larch trees, all the trees on Slieve Gullion and the local mountains were cut down leaving the already endangered red squirrels without their staple food, the larch cone.

Since then the Red Squirrel Group has been supplementing their diet mainly with peanuts.  To continue with this vital work we depend on sponsorship and donations of nuts from local businesses and members of the public.

We would appreciate if you could make a donation- peanuts are preferable. All donations are publicly acknowledged and a publicity photo shoot will be arranged. Contact the group on email [email protected]