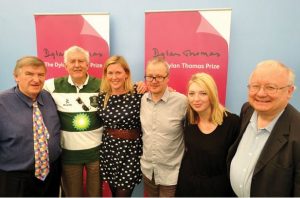 The £30,000 International Dylan Thomas Prize is awarded to the best eligible published literary work in the English language, written by an author aged 39 or under.

Launched in 2006, the annual Swansea University International Dylan Thomas Prize is one of the most prestigious awards for young writers, aimed at encouraging raw creative talent worldwide. It celebrates and nurtures international literary excellence.

The £30,000 Prize is awarded to the best published or produced literary work in the English language, written by an author aged 39 or under.

Dylan Thomas, the quintessential adolescent writer, was ideally suited to serve as an inspiration to young writers everywhere. The freshness and immediacy of his writing were qualities that he never lost. The Prize seeks to ensure that readers today will have the chance to savour the vitality and sparkle of a new generation of young writers.

“Dylan Thomas was the Swansea–born poet whose spell-binding words and performances conquered London and North America and identified him as one of the most influential writers of the mid twentieth century. The Prize established in his name has captured the imagination of writers internationally and in recent years thirty short-listed writers from all continents have come to Wales to speak to students and writing classes. The Prize has been won by writers from Wales and Northern Ireland, a Vietnamese Australian and three Americans. Swansea University is the chief sponsor of the Prize and is proud to be associated with a competition that invites entries from young writers from around the world”. (Peter Stead, Founder and President of the International Dylan Thomas Prize)

The winner will be announced at the final awards ceremony in Swansea, Wales on 16 May 2019.