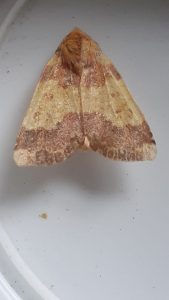 There are around 1500 species of moth that have been recorded in Ireland.  Some, like the Cinnabar, are day-flying, but the vast majority fly during the hours of darkness and they can be recorded by using a moth trap.  Basically this is a light that attracts the moths, which then spiral round and fall down into the trap allowing them to be identified, recorded and released unharmed.

At Derrymore House near Bessbrook, the National Trust Ranger and volunteers have been trapping moths throughout the year.  Derrymore has a lot of woodland, with many old trees, which are the foodplants of the larvae or caterpillars.  This year, several species which haven’t previously been recorded in the South Armagh area, have turned up.  These include the Barred Sallow, which hadn’t been recorded outside of Belfast and Cosmopterix orichalcea, a tiny and colourful micro moth, which was recorded in a garden in Bessbrook and was the first record of this species in NI.

It’s unfortunate that many people just associate moths with making holes in their woollen jumpers, but here there are really only main 2 species whose larvae feed on wool.  The vast majority eat leaves, although there are some that feed on lichen and others that feed on the debris in birds’ nests.  The Satellite moth, which has been recorded at Derrymore, even supplements its diet of leaves by snacking on caterpillars of other species!  Moths are one our main pollinating insects and form an important part of the diet of birds, bats and any other animals.  It is estimated that a single brood of Blue tits can eat their way through 10,000 moth caterpillars before they fledge!

Hopefully next summer there will be opportunities for visitors to Derrymore to see moth trapping in action and have a look at some of these beautiful insects. 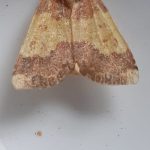 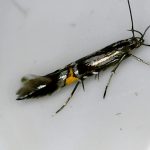 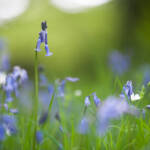 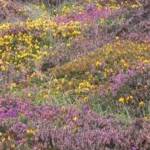