LOVE AT A HIGH ALTITUDE 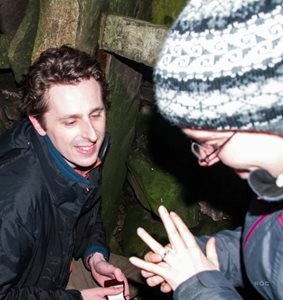 Irish language enthusiasts from South Armagh and Co. Louth, who gathered to watch the winter solstice in a passage tomb on the top of Slieve Gullion (573m) on Sunday (Dec 23rd) witnessed an event of an entirely different sort.

The 20 or so strong group from ‘Gaeltacht Oirdheasceart Uladh’, were sitting in the tomb, which is aligned to the setting sun of the winter solstice. They were waiting for the sun to illuminate the tomb, when they were joined by a young American couple. Amid songs, some poetry and chat, as the light began to shine in through the entrance, one of the group observed that it would be a very romantic place for a marriage proposal. With that, the American, David Whitehead turned to his girlfriend, Cristin McKee, and said, “It’s funny they should say that because….” And with that, he got down on bended knee, produced a ring from his pocket and asked his girlfriend to marry him.

All in the tomb, Ireland’s highest surviving passage tomb and dating back to about 3,500 B.C., were quiet as they awaited her response, which, luckily for David was a resounding yes. Her answer was greeted with cheers and a very relieved David slipped a celtic style diamond ring on her finger.

The couple had been in Ireland for a number of weeks and flew back the next day to New York where they live, where David is training to be a surgeon and Cristin works as an illustrator – her last work being on Ice Age 4. The couple share a passion for archaeology. “We had hoped to go to Newgrange”, said Cristin, “but it was too touristy and too busy. We searched other places on the internet and discovered Slieve Gulion.” They drove up from Limerick earlier in the day, found their way through Forkhill and parked at the foot of the mountain. After a one and a half hour climb to the summit, they reached the tomb in good time to witness the wintery sun illuminate the tomb at six minutes past four. In fact Cristin was able to see the light sparkle on her new engagement ring. According to David, he’d had the ring made in Dublin. “I managed to slip away to collect it earlier in the week and it’s been burning a hole in my pocket ever since!” The couple, who are from Boston and Rhode Island respectively, have been together for 8 years and Christin wasn’t sure when they might get married. “It’s all been a bit of a shock, a wonderful surprise, but we’ll have to talk about it and try to figure out how we get our families together as they are all scattered around the United States.”

Cristin’s great-grandmother was sent to America by her Father, as she was believed to have burned an English flag near her home in Nenagh. David’s ancestors come mainly from Lithuania, but he too has Irish roots, with two of his great-grandparents coming from Ireland. “It was amazing to be in such a sacred place, when asking Cristin to marry me. It was made all the more special that the people gathered there were singing in Gaelic when we entered the tomb and they serenaded us too after I proposed. I really appreciate that,” said David, who added, “one of the Irish group had quipped that it’s an Irish tradition that all witnesses to a marriage proposal had to be invited to the wedding.” And he concluded, “it’ll be a lively gathering so!”