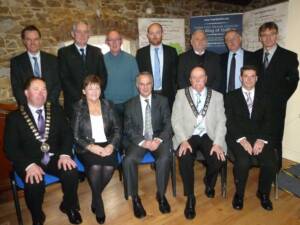 Environment Minister Alex Attwood launches The Ring of Gullion Area of Outstanding Natural Beauty Management Action Plan 2011-2016 on the 20th anniversary of the designation of an AONB at the Slieve Gullion Courtyard in South Armagh on Wednesday 14th December.

Work has already started on the actions in the management plan with the Slieve Gullion footpath repair program underway. A number of other initiatives have been well received in the area too. The Ring of Gullion hosted a number of family days out including historical bus tours, rambles, and geology, archeology, art and photography events.

Speaking at the launch Environment Minister Alex Attwood said: “I am pleased to launch the Ring of Gullion AONB plan today in the heart of the AONB.  While the preparation of the plan was led by the Northern Ireland Environment Agency it has depended on the contributions of many including local residents and public agencies.

“I would like to give a special mention to Newry and Mourne District Council who has a central and very positive role in the future of the AONB.  I am confident that through their AONB Officer they will support delivery of the management plan and in doing so unlock new opportunities for the area and those who live in it or visit.”

Continuing the Minister added: “I am pleased to see that a number of actions contained in the Management Plan are already underway. The new path to the summit of Slieve Gullion will allow the heathland to recover by stopping erosion and also improve access to Cailliagh Berra’s House, a 6000 year old monument of which the local population is very proud.”

Supporting the Management Plan and speaking at the Launch Professor Patrick McKeever, from Geological Survey of Northern Ireland, said: “The geological heritage of the Ring of Gullion is known to geologists the world over and it is the foundation of the high scenic value of the area. But when you then add that to the area’s myths, legends and folklore and it’s rich biodoversity, you really begin to understand what a special place the Ring of Gullion really is.”

Charlie Casey, Mayor of Newry and Mourne District Council added that “Newry and Mourne District Council are very happy to welcome everyone to the very aptly named area of outstanding natural beauty to celebrate the anniversary of its official designation as an AONB and to launch the Ring of Gullion Management Plan. The council has a strong history working with special unique places and will fully support this Management Plans implementation”

The full document can be downloaded from the publications page on www.ringofgullion.org