Giant Adventures – Footsteps in the Forest & Wake the Giant 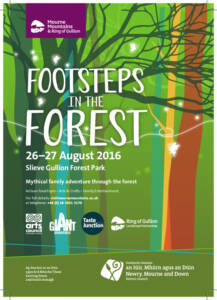 Newry, Mourne and Down District is full of Giant Adventures this month as the region plays host to two new free and Festivals, WAKE THE GIANT in Warrenpoint and FOOTSTEPS IN THE FOREST at Slieve Gullion Forest Park. Both two day events feature myths, magic and theatrical flair which will enthral visitors to the coastal village of Warrenpoint, Co Down and the breath-taking Ring of Gullion Area of Outstanding Natural Beauty.

Footsteps in the Forest 26th-27th August

The Forest at Slieve Gullion Park will be the setting for a mythical gathering as magical creatures from across the region converge for their annual conference.

Over 20 characters have been ‘created’ by writer Declan Carville based on local myths including some Mischievous Trolls, Woodland Fawns, the Birdman of Slieve Donard, Finn McCool, the Fairy Queen and the legendary witch Cailleach Bheara.

Declan’s characters have been brought to life by production company ‘Footsteps’ so that throughout your theatrical tour of the Forest you will physically encounter all the mythical characters while they share their stories.
The event will run from 10am – 8pm daily and will also incorporate a food market, a live ‘forge-in’ by local Blacksmith, Gerard Loughran, lots of circus performers, plays and characters to meet.

You can book your tour, guided by a (mainly) well-behaved Troll, by clicking here.

A park and ride facility will operate during the event and there will be no public parking on the site for the two days of the festival.

Wake the Giant is a free event delivered by Newry, Mourne and Down District Council and takes place 20 -21 August in the picturesque setting of Warrenpoint, Co Down. It is part of the Giant Adventures event series taking place over the summer.

The festival is inspired by the myth of a sleeping Giant reposing on the Cooley Mountains. Local author Declan Carville worked with over 600 school children across the district during June 2016 and the output from the children’s workshops formed the basis for a spectacular event – Wake the Giant.

On Saturday 20 August, visitors can enjoy live street theatre, live music, and free children’s craft workshops.
On Sunday 21 August, a ‘Glamour Clamour’ parade will wake a 32 foot Giant snoozing in Warrenpoint Park – hence ‘Wake the Giant’. The whole event will be coordinated and directed by a larger than life character – the Point Man, who will enthral and entertain the waiting crowds.

An Artisan Fayre will take place on both days located at the promenade car park beside Bells Amusements.
Across the weekend the Marine Parade will be transformed in to a live music hub with entertainment from the James Peake Experience, Motown Sensation, The Logues, The Professionals, The Nooks and culminating with a spectacular laser show at 10.30pm on Sunday 21st August.

Both Giant Adventures are free of charge and delivered by Newry, Mourne and Down District Council supported by the Arts Council Challenge Fund Initiative.

Newry, Mourne and Down District Chairperson Cllr Gillian Fitzpatrick said, “These are huge events to develop and we are extremely excited to bring two new Festivals to the district, following many months of nurturing ‘big’ ideas. The investment from these events will put our region on the map as tourism hotspot in a ‘gigantic’ way and draw in many new visitors.”

Councillor Fitzpatrick continued, “Once here they can experience the beauty of our water, mountains and forests, enjoy local food and drink produce and the high standard of our hospitality providers. The Festivals will give our stunning region a unique selling point, one which we can build upon annually to make WAKE THE GIANT and FOOTSTEPS IN THE FOREST unmissable events with significant national and international draw.”