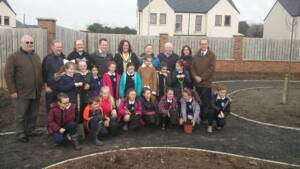 Part of the former Forkhill Army Base site has benefited from just over £350,000 of environmental improvement works funded by the Department of Agriculture Environment & Rural Affairs (DAERA) and Newry, Mourne and Down District Council.

The Forkhill site represents a significant open space in the centre of the South Armagh village. Having lain derelict for many years, the new Forkhill Greenspace Pathway Project represents another phase of development on the site.  The new project has resulted in an 800 metre circular pathway with associated lighting being installed around the boundary of the site.  At various points along the pathway there are seated areas, with bulb and tree planting throughout.

Chairperson of Newry Mourne and Down Council, Councillor Roisin Mulgrew said, ‘I have enjoyed working with this Forkhill Project over this last few years and I am delighted that this pathway phase has been completed. It will be a great asset to the village and I look forward to working with the local community and groups such as FADDA in development of the overall site in future years.’

Prior to the commencement of site works by contractors McAvoy Construction, Scheme Consultants AECOM had worked very closely with the local St Oliver Plunkett Primary School on a public art project.  Together with the consultants and contractor, art work images designed by the P5/P6/P7 pupils were installed throughout the site.  This Artwork depicts imagery, associated with the Ring of Gullion as well as other items on local & national geography and history.

Speaking on behalf of the Forkhill and District Development Association (FADDA), Mr Bernard Boyle stated, ‘The delivery of this Pathway Scheme represents the completion of another one of the key projects from the Original site Master-plan.  He added, ‘FADDA welcomes the continued partnership approach with agencies such as the Council and DAERA, which will be important in taking forward the remaining elements of overall site development’. 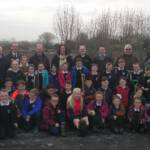 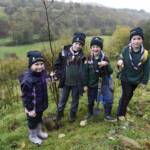 Communities spruce up the landscape, with the gift of free trees 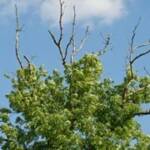 Forestry Minister Michelle O’Neill today introduced emergency legislation, in tandem with similar legislation in the south, to stop the importation…