Dragons in the Hills Project’s Music and Myths Series 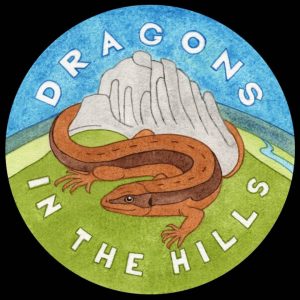 The Dragons in the Hills project is a three year National Lottery Heritage funded project led by the Amphibian and Reptile Groups UK , Mourne, Newry and Down District Council through the AONB teams and the Herpetological Society of Ireland.

The project aims to reconnect local communities with their natural landscapes through the conservation of reptiles and amphibians. The project will be turning two in 2021, and despite the calamities and heartbreaks of COVID, and repeated lockdowns throughout 2020 they have managed to keep on pushing forward.  They have logged over 250 volunteer hours from citizen scientists surveying for reptiles and amphibians and almost 500 volunteer hours with our local community groups creating and maintaining habitats! Well done to everyone involved.

The first year of the project focused on the Ring of Gullion AONB area in South Armagh. As well as its fabulous musical heritage, South Armagh is steeped in storytelling – rooted in ancient times when the first peoples lived in this part of Northern Ireland, and continuing to the present day. The project teamed up with a number of groups and individuals in the Ring of Gullion area to create this 4 part Music and Myths Series linking the creative arts, storytelling, well being, landscape and history helping us understand and cherish this mysterious ancient landscape where the dragons are living.

Dragons in the Hills: Music and Myths Series by the Fireside 1 – with Traditional Arts Partnership (TAP) and historian Una Walsh

In the first of the Music and Myths by the Fireside, we hear the fabulous lockdown music of the 15-18 year olds of the Traditional Arts Partnership – South Armagh, and then hear from local historian Una Walsh, about the origins of Halloween and other magical tales from ancient times (image drawn by Mabel Cheung Harris).

Dragons in the Hills: Music and Myths by the Fireside 2 – Marie Murphy Stories of Slieve Gullion

South Armagh is steeped in storytelling – rooted in ancient times when the first peoples lived in this part of Northern Ireland, and continuing to the present day. In the second of our Music and Myths by the Fireside, we hear some wonderful tales part history and part myth, about Slieve Gullion from local author Marie Murphy, who is literally our lady of the mountain (image drawn by Mabel Cheung Harris).

Dragons in the Hills: Music and Myths 3 – Ann Ward – A Personal Journey Guided by Nature and Heritage

In the third of our Music and Myths series, we are invited to immerse ourselves in the magical world of Slieve Gullion, brought to you through photos and artworks by local people, and hear how the experience of growing up on the Ring of Gullion with its deeply spiritual roots guided Ann Ward on her personal journey to self-understanding and mindfulness.

Dragons in the Hills: Music and Myths Series  4- Seamus Murphy, Colleen Savage and Padraig Carragher
In the fourth of  the Music and Myths series, find out how one of the landscape features so beloved of our common lizards, the Famine Walls that cross the landscape of Slieve Gullion and the Mourne Mountains, were created.
Local historian and writer Seamus Murphy, tells us about the widespread famine and fever resulting from the potato blight of the 1840s, and how controversially the scheme of encouraging starving and sick people to walk up a mountain and spend ten hours of hard labour building a wall was deemed to be a means of helping local people to ‘get back on their feet’. Seamus describes the painful and distressing events that led to this, and the lengths that desperate people were prepared to go to, to try and save their families. He also tells of the kindness of others – including unexpectedly the Choctaw Nation, themselves a displaced people. Finally, we hear from local musicians Colleen Savage and Padraig who set traditional music to the stunning drone footage of Slieve Gullion by Matthew Magilton (image copyright Gary McParland). 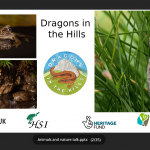 Dragons in the Hills Project- How to Get Involved

Josh Twining is a conservation biologist and the new Project Officer for the new Dragons in the Hills project, a… 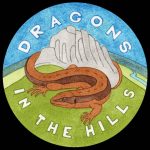 Dragons in the Hills Project Update