Dorsey Dig – Delving into the mysteries of the Dorsey Embankment 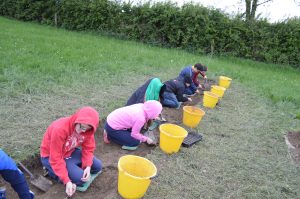 Following on from the highly successful community archaeological dig at Cornahove Ringfort in 2016, the Ring of Gullion Landscape Partnership Scheme is once again teaming-up with Queen’s University Belfast’s Centre for Archaeological Fieldwork to discover more of South Armagh’s secrets. The site for the big dig this April will be the Dorsey Embankment near Silverbridge. Anyone interested is warmly invited to come and join the professionals, getting dirty, working alongside the archaeologists with a chance for a preview of some of the discoveries that have been made. There are two open sessions on Saturday 6th April from 10.00-11.30 or 12.30-13.30. Booking is essential, via the events page as places are limited.

Sections of the Dorsey Embankment can be seen in the Silverbridge area of South Armagh. A roughly six-metre-deep, clear-cut section, is plainly visible in the townland of Tullynavall, at the junction between the Tullynavall and Drumill roads where the vegetation has been cleared by Ring of Gullion Conservation Volunteers.

“Archaeologists are still trying to work out exactly what the Dorsey Embankment was; it could have been an Iron Age fortification or even the home of the legendary Cú Chulainn himself. In Irish literature it was often referred to as the ‘Doors of Emhain’ (Armagh). Whatever the true story is, it has played a vital role in the Iron Age history of the Kingdom of Ulster and should prove to be a fascinating place for an archaeological dig, which will hopefully uncover another piece of the Dorsey puzzle and add to its story.” said Mark Murnin, Chairperson of Newry, Mourne & Down District Council.

If you are unable to attend a hands-on archaeology session, there will be an on-site results night on Tuesday 30th March from 7.30pm – 9pm. 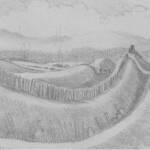 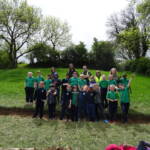 Diggin Into Our Past – ‘Fanning’s Fort’, Cornahove – RESULTS