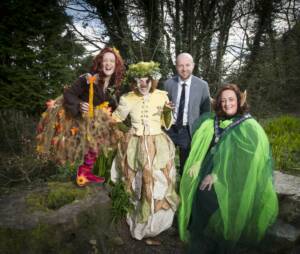 Enchantment and mystery abounds as Newry, Mourne and Down District Council prepare for the return of the first of its Giant Adventure festivals, Footsteps in the Forest.  The winner of the 2016 Heritage Council of Ireland, Cool for Kids award will take place at Slieve Gullion Forest Park, kicking of the festival season on Saturday 3 and Sunday 4 June 2017.

The inaugural 2016 event saw thousands of children spell bound as they wove their way through the enchanted forest, encountering mythical creatures gathering for a high summer meeting.  This year they’re back and a new quest has presented itself.  As they gather on the mountain once more, news reaches the forest of a new challenge to the peaceful order.

This year’s festival will hold a connection to Wake the Giant, in Warrenpoint at the end of August and will tell the tale of giant, Finn McCool and the magic rings of Gullion.  The forest fairies and mountain trolls themselves will take visitors on a magical treasure hunt as the story comes to life around them.

Newry, Mourne and Down District Council Chairperson, Councillor Gillian Fitzpatrick said, “Last year’s Footsteps in the Forest was a fantastic event and a worthy award winner and I am excited to discover what the mythical creatures of Slieve Gullion Forest has in store for us in June.  This event is to the fore of sharing our unique ‘Mountains, Myths and Maritime’; the elements identified through our recently launched Tourism Strategy that are the unique selling points of our area.   Events such as this act as a great attractor of visitors to the district and generate a very significant annual contribution, circa £8m, for the local economy.”

This weekend long festival will have something for fantasy lovers of all ages.  As well as a huge cast of magical creatures, it will have an abundance of family fun wherever you turn. Take part in children’s craft workshops in sword and shield making, watch a real blacksmith at work and try your hand at wood turning and other fascinating crafts. There’s traditional Irish music and delicious foods from local artisan producers and so much more.

Footsteps in the Forest is a free event but booking is essential for the guided theatrical performances. For more information visit ringofgullion.org or contact the Festival Office at 028 3031 3170 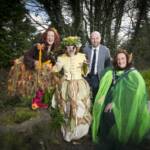 What is Footsteps in the Forest Giant Adventure As High Summer lingers on the horizon, a mythical people are coming… 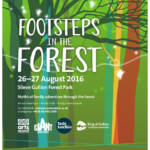 Giant Adventures – Footsteps in the Forest & Wake the Giant

Newry, Mourne and Down District is full of Giant Adventures this month as the region plays host to two new… 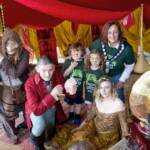 Thousands of New Footsteps in the Forest

Slieve Gullion Forest Park was the host venue for lots magical creatures from across the district last week as Trolls,…