Home » News » Diggin Into Our Past – ‘Fanning’s Fort’, Cornahove – RESULTS

Diggin Into Our Past – ‘Fanning’s Fort’, Cornahove – RESULTS 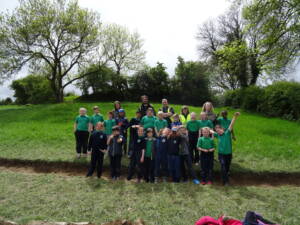 A recent excavation into the site of a ringfort at Cornahove provided an exciting opportunity for archaeologists to explore the hidden history of South Armagh. The programme was undertaken by the Centre for Archaeological Fieldwork at Queen’s University Belfast on behalf of the Ring of Gullion Landscape Partnership Scheme, with their staff helped in their work by 330 local school children.

With its origins in the Early Medieval period (c.AD 800) and the home to members of the local farming community, the excavation revealed that the fort had a shallow ditch that ran around its exterior. The soil removed during the digging of this ditch would have been used to strengthen the bank around the homestead, thereby helping the occupants keep safe from raiders or from wolves, with the farmer’s valuable cattle also kept inside the enclosure at night. A fragment of metal slag recovered from the base of the ditch suggests that metal working took place either in the fort or in its immediate vicinity. The excavation also revealed tantalising evidence of the later use of the site, with a number of spade cultivation ridges encountered in the interior of the fort. These would have been used for growing potatoes and the ceramics recovered from them suggest they date to the eighteenth or nineteenth century when the fort had been reused as a cottage garden.

Other interesting artefacts that were discovered during the excavation include a hone-stone for sharpening knives, and a prehistoric hammerstone. The latter artefact was particularly intriguing. Dating back some 5,000 years to the Neolithic period was this object found and taken to the ringfort by one of its Early Medieval occupants? Or was it lost way back in prehistoric times and only rediscovered by chance by the modern archaeologists? 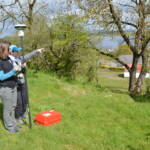 In partnership with Queen’s University Belfast’s Centre for Archeological Fieldwork (CAF), the Ring of Gullion Landscape Partnership is planning to… 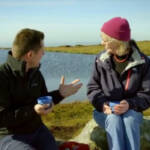