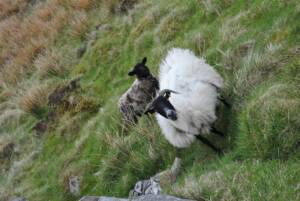 A new alliance of farmers, walkers and conservationists has come together to combat serious damage being done by scramblers and quads in the Cooley Mountains and the Ring of Gullion.

There is a complete ban on off-road vehicles in the Cooleys. Yet gangs of scramblers up to a dozen strong have been seen chasing sheep across the mountains in the middle of the lambing season.

“It is hard to settle sheep on spring pasture when they are being chased like this,” a farming representative said. “Some of the pastures are churned up so badly that it’s visible in satellite photos and there are concerns that Single Farm Payments will be affected.”

Damage can also be seen on Slieve Gullion, particularly on the north side, but the problem is particularly severe in the Cooleys because there are more than a dozen points where motorbikes and quads can get onto the mountains. Efforts by Gardai to stop them have been frustrated as the gangs can simply cross the border again.

“Our mountains are a unique treasure and we want to raise public awareness about the damage that is being done to them by tiny groups of selfish people,” a group spokesperson said.

A public meeting to discuss measures to cope with the problem has been called for Wednesday 9th April in the Carrickdale Hotel at 7:00PM.