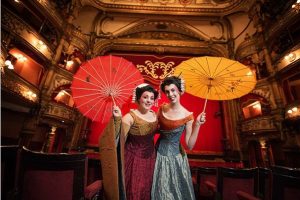 These prestigious and valuable biennial awards aim to showcase and support the development of five exceptional young Northern Ireland musicians by providing funding awards, worth £5000 each, to three classical musicians, one jazz musician and one traditional musician.  This financial award enables recipients to develop their musical aspirations by spending a sizeable amount of time learning from a master musician, mentor, teacher or composer either in Northern Ireland or abroad.

In addition to this training opportunity, recipients receive two professional radio broadcast engagements with BBC Northern Ireland, including one with the Ulster Orchestra.  Performances at this level raise not only the professional profile of the young musician but also give a boost to their performance experience.

The music genres covered by the award includes three classical awards, one jazz award and one traditional music award.

Previous traditional music awardee, Niall Hanna, was able to use the award to record and release his debut album, Autumn Winds, in 2018.  Commenting on his experience Niall said,

“As soon as I found I had got the Young Musicians’ Platform Award, I started to plan my album with my producer, Donal O’Connor.  As part of the award I was also able to play a series of solo concerts, something new for me, and try out material before it was released.  My BBC mentor, Lynette Fay, was also wonderfully supportive in helping get the music out there and played on radio. ”

Applications for the Northern Ireland Young Musicians’ Platform Awards are open from Thursday 6 September and will close on Thursday 25 October.  Visit artscouncil-ni.org/funding/scheme/young-musicians-platform-award

Applications will be assessed by a specialist panel and shortlisted applicants will then be invited to audition at the Crescent Arts Centre, Belfast in early November 2018, where they will be asked to perform three contrasting pieces in style and period.