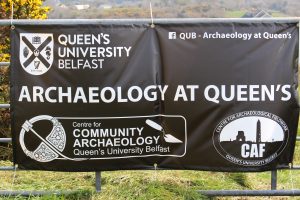 Check out this series of online talks providing an update on the archeology research which has taken place in south Armagh over recent years as part of the Ring of Gullion Partnership work. The series of talks are were organized in partnership with Creggan Historical Society and the Centre for Community Archaeology at Queen’s University Belfast.

Covering the community archaeology digs in Cornahove and the Dorsey and geophysical surveys in the area. Find out the lessons learnt and topics for further investigation.

The most recent archaeological project focused on discovering a ‘lost’ 15th century church and graveyard site in the townland of Urker. This ancient ecclesiastical site was known as Killyloughran but no extant physical evidence of the church has survived on the landscape over the subsequent centuries. Guided by the records of a mound site identified on the early 19th OS map also known as Killyloughran (available to view here), the QUB team conducted a geophysical survey which is discussed in the second talk of the series below. Over the course of the project, local knowledge and snippets of details have emerged on this unique placename (which does not survive today as a modern placename) and its site, including:

Restrictions of the Covid-19 pandemic has restricted the opportunity for greater community engagement on this historical site of Killyloughran and we would appreciate any contributions of local lore or details that may be associated with the site – please share any related information via [email protected].

Brian Sloan – Cornahove and the ringforts of south Armagh

Ringforts are enclosed farmsteads of the Early Medieval period and the most common archaeological monument type in Ireland. Brian Sloan from the Centre for Community Archaeology at Queen’s University will discuss the investigation he led at Cornahove ringfort near Lough Ross in a community-based excavation undertaken for the Ring of Gullion Landscape Partnership. Brian will also discuss other local ringforts in south Armagh, such as Corliss Fort (one of the best-preserved bivallate ringforts in the county).

Colm Donnelly and Siobhán McDermott from Queen’s University will be speaking about two geophysical surveys that were recently undertaken in south Armagh. The first project investigated part of the Slighe Miodhluachr, the great northern road from Tara, and was supported by the Historic Environment Division of the DfC. The second project investigated a “lost” Medieval church site at Killyloughran and was funded by the Royal Irish Academy.

Cormac McSparron – Excavations at the Dorsey in 2019

Cormac McSparron from Queen’s University will discuss the archaeological excavation that was undertaken in 2019 at the Dorsey on behalf of the Ring of Gullion Landscape Partnership. The Dorsey is a large Iron Age earthwork enclosing an area measuring approximately 1.8 km long and 0.5 km wide. Previous excavations had indicated that the entrance through its “South Gate” is original and that the modern Bonds Road, which runs through the Dorsey, may follow the route of the Slighe Miodhluachr. During excavations in 2002 three palisades were found flanking the west side of the modern road. The community-based excavation in 2019 sought to investigate if a corresponding palisade might be detected on the east side of Bonds Road.