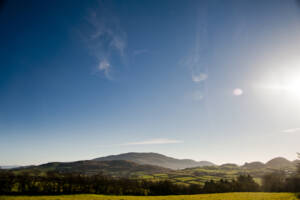 Both the Ring of Gullion and Slieve Gullion have their origins in volcanic activity that rocked this area around 60 million years ago. At that time the European and North American continents were still joined together. However, as they began to drift apart, a process that eventually led to the creation of the North Atlantic Ocean, large volumes of rock at depth began to melt. Some of this molten rock, or magma, cooled deep underground into rock but some of it made the surface where it was erupted, sometimes explosively, through volcanoes.

From the summit of Slieve Gullion the circular lines of hills making up the Ring of Gullion can be seen. The hills of the Ring are up to 300m and follow the line of a circular fracture, or fault, in the Earth’s crust. The rocks that make up these hills are dolerite, gabbro and felsite, all of which cooled from magma deep underground. However some parts of the hills are made up of basalt, volcanic glass, volcanic tuffs and volcanic breccia and the existence of these are evidence of, occasionally explosive, volcanic activity at the surface here 60 million years ago.