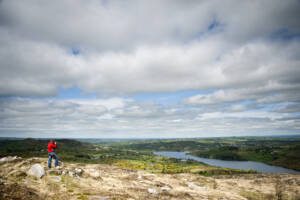 The often calm, tranquil waters of Cam Lough stretch for just over two kilometers in a north-west to south-east direction. This narrow, elongate lough provides rich waters for the fisherman and marks a break in the lines of hills that surround Slieve Gullion, the Ring of Gullion. Infact, Cam Lough marks the point where the Ring of Gullion is broken, or offset. On the western side, the ring of hills intersects Cam Lough at its northern end at Sturgan Mountain. However, on its eastern side, the ring of hills intersects the lough halfway down its eastern shore.

The Ring of Gullion was once a continuous, unbroken ring of hills made up from rocks that were once molten and which were intruded into, and erupted out of volcanoes, that followed a circular fracture, or fault, that existed here around 60 million years ago.

A younger fault then developed here, running in a north-west to south-east direction and the rocks on either side were displaced. Geologists have estimated that the total movement along this Cam Lough Fault was up to 2km. This movement didn’t happen in one go but resulted from a series of much shorter movements (a few metres at a time) that occurred over a much longer period of time (probably over several million years). Each time movement occurred on this fault, it would have been felt by animals living here at the time as an earthquake. Thankfully, it is a very long time since the Cam Lough Fault moved and earthquakes in south Armagh are a feature only of our distant geological past!

The lough follows, very precisely, the line of the Cam Lough Fault, running for about 2.5km in the same north-west to south-east direction as the fault. The lough owes its existence here to the action of ice. Starting around 2.5 million years ago the global climate began to oscillate between periods of warmer climate and periods of extreme cold. During these cold periods, great sheets of ice would periodically cover large parts of Ireland as the world plunged into an Ice Age. As the ice advanced over the countryside it would erode deep into the underlying rock. Any weakness in this rock would be exploited by the ice which would erode deeper the area of weakness. The Cam Lough Fault has created such a weakness in the rock of south Armagh and it has been over deepened by the erosive action of ice allowing the waters of the present lough to infill the hollow that the ice has excavated.