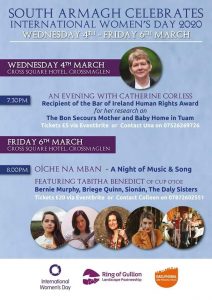 “The subliminal transatlantic touches through her playing are like Easter eggs, keeping listeners on their toes, never quite sure what’s coming next.”

Tabitha can usually be heard performing with her two brothers in the Northern Irish band Cup O’Joe, as well as the All Female Anglo-Irish Bluegrass Band Midnight Skyracer. She has toured internationally with both of these bands and continues to have a busy schedule with them throughout the year.

Some accolades include being a 2015 BBC R2 Young Folk Award Finalist with Cup O’Joe, and a nominee for both Band of the Year (with Midnight Skyracer) and Instrumentalist of the Year at the IBMA Momentum awards in Raleigh, North Carolina in 2018.

On the evening Tabitha will be joined by her husband David and her brother Benjamin. Performances on the evening will also come from some of the best female artists that South Armagh has to offer including traditional vocal group The Daly Sisters, banjo player Bernie Murphy, fiddle player Briege Quinn and singer songwriter Sionán Murphy.