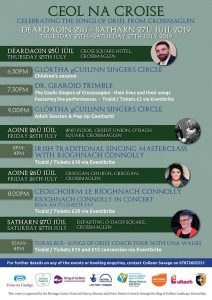 By early 20th century, Southeast Ulster had become the last surviving Gaeltacht region of the eastern seaboard with many families of native Irish speakers still scattered throughout this rural landscape, including the greater Crossmaglen district whose Irish speaking inhabitants would also become one of the most important and prolific sources for this area’s rich oral song tradition that has survived for over 400 years.

With Oriel song peppered among her reportoire we look forward to welcoming the amazing talent of Ríoghnach Connolly to Ceol na Croise on Friday 26th July Úrchill a’ Chreagáin, Creggan Church, Crossmaglen.

The ‘irrepressible, inimitable’ singer grew up as part of the Armagh Pipers Club where she had her eyes opened to the world of folk music and how it travelled into other countries and cultures. This would shape Connolly’s time studying and working as a community musician in Manchester, a vibrant city she would be actively involved with, broadening her horizons and helping others at a grassroots level.

It was there where Connolly formed Honeyfeet, a ‘folk-hop’ collective who have played countless festivals over the last 12 years and have recently finished recording their third album. Never restricted to one sound, Connolly has worked both in studio and live spanning across Irish traditional, folk, blues, jazz, electronica and more. Her formidable voice has been used to front a ream of musical projects, including her own 2012 album Black Lung which was recorded before her headline appearance at the Manchester Jazz Festival and adopts traditional Irish sean-nós singing.

She is also part of collaboration-based project Beware Soul Brother, spawned from a previous residency in Brazil, regularly features with Afro Celt Sound System and is one half of The Breath with Stuart McCallum, which has released two albums to date. Connolly is now the musician in residence in the Nerve Centre, Derry.


This event has taken place. Please browse our events for upcoming events. 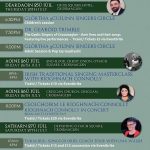 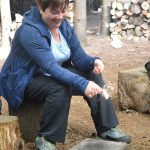 Come along to the Ring of Gullion Lúnasa Festival and participate in slow adventure, immersing yourself in the rich landscape, culture…