Browse through the different categories to see the history of Bessbrook. 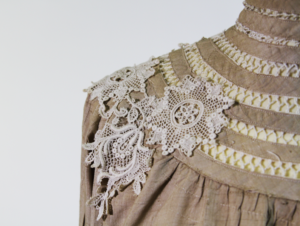 Bessbrook is named after Elizabeth (Bess) Nicholson, wife of Joseph Nicholson whose family ran a linen business in the district from 1806 until 1845. The ‘brook’ is a stream which runs through the outskirts of the village.

It was founded as a model village –‘model’ being used in the sense of an ideal to which other developments could aspire, with spacious streets and squares surrounding a large linen mill owned by the Quaker Richardson family. As a social experiment it is similar to the model of the better-known Bournville company town founded by the Cadbury family near Birmingham, England, however it predates this development by more than 30 years. It is likely that the precedent on which it was based was the industrial village at Portlaw, County Waterford, Ireland, founded in 1825 by the Quaker Malcolmson family.

Among the principles on which the village was based was a philosophy of ‘Three P’s’ – there should be no public houses, no pawn shops and no police. It was the Richardson’s belief that without a public house there would be no need for a pawn brokers or police station, and it remains that way today. There was a brief period when there was a police station in the village but it is no longer there.

At one time, Bessbrook linen was among the finest in the world and the mill provided most of the employment in the village. Tenement houses were constructed for the mill workers, many of which were of such good quality that they are still inhabited today. Each house also had an allotment garden for the growing of vegetables, and the area of the village where they were situated is still known as ‘The Gardens’, although the allotments themselves have been replaced by further housing. Most of the buildings in the village are constructed of local granite.

The village’s Quaker meeting house is set in the demesne of The Woodhouse, which was inhabited by the Richardson family until the 1980s.

Much of the Bessbrook Model Village Living History Archive Project is about capturing memories, culture and traditions and creating a digital collection of objects (photographs, documents, books, etc) to illustrate what life was like living in a self-contained model village through key periods in its history – from its establishment through to the closure of the mill, during ‘the Troubles’ and through to the current day.

We invite you to upload your collection of photographs, videos, letters and whatever else you have telling the story of Bessbrook onto our easy to use submission form, here.

Return to the Ring of Gullion Site