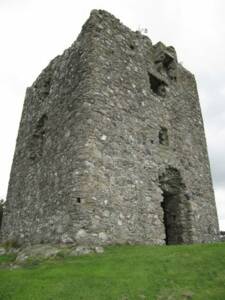 Moyry Castle is a 17th-century campaign fort overlooks the Moyry Pass, the valley known as the ‘Gap of the North’. It has always been the main direct north-south route in eastern Ireland. In the days of the Fianna legends the men of Ulster sallied forth through this valley to harry the tribes of Leinster.

The small square tower has unusual rounded corners and numerous gun-loops, from ground-floor level right up to the wall-walk. It is a very basic castle, with no stairs. The living quarters, with fireplaces and windows, must have been reached by ladders. The wallwalk, complete with its exposed latrine, must also have been accessed by a ladder. The doorway was protected by a gun-loop to one side and by a drophole in the parapet above, allowing missiles to be dropped on to attackers. The stone bawn wall which once surrounded the castle has mostly gone except for one isolated stretch to the south east.

The castle was built to secure the pass by Lord Mountjoy, Queen Elizabeth’s most effective and ruthless general, who was sent to Ulster to crush the power of Hugh O’Neill, Earl of Tyrone. In May and October 1600 Mountjoy’s armies advanced north into the pass through bogs, streams and dense woods. On both occasions they returned via Carlingford, the lesser of two evils.

In June 1601 they advanced north again, heading for the River Blackwater and Tyrone. This time Mountjoy cleared the Moyry Pass by cutting the woods and built this fort on the rock to secure the pass. The castle was reputedly finished ‘within the month’ and immediately garrisoned under the command of Captain Anthony Smith.

The Moyry Pass map made by Richard Bartlett 1602-3 (National Library of Ireland). The intrepid Norfolk born cartographer travelled across Ulster with Mountjoy’s armies during the O’Neill campaign. Soon after drawing this map, Bartlett met a violent death, and had not time to fill in the title band. ‘Our geographers do not forget what entertainment the Irish of Tyrconnell gave to a mapmaker about the end of the late rebellion,’ wrote the Irish Attorney General in a letter in 1609. ‘When he came intoTyrconnell the inhabitants took off his head because they would not have their country discovered.’ After this experience the crown’s surveyors in Ulster took care to work only under guard. 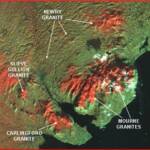